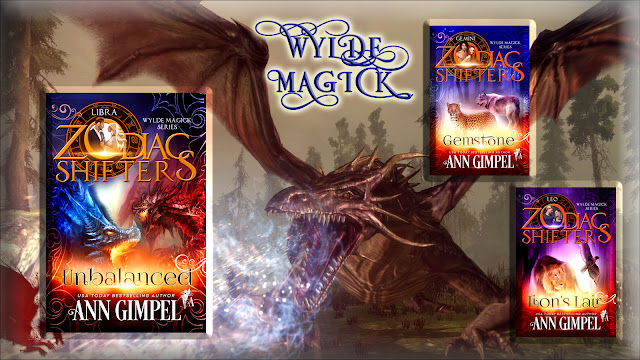 Wylde Magick is pure, untamed source material. Ancient and wise, it's existed since the dawn of time.
No matter how old it is, though, it's under attack from dark forces that threaten the very fabric of its existence. If it fades into nothingness, vampires will reign unopposed.

Buy yours today!! Also available in a boxed set at savings.

Welcome to my corner of the Zodiac Shifter world. Never forget! A SHIFTER'S MATE IS IN THE STARS.
Gemstone
A hunky jaguar shifter + a smart, savvy wolf = smoking hot chemistry!
Niall’s nothing if not charming with his Irish brogue and dashing good looks. Jaguar shifter and player to the core, he’s a love ’em and leave ’em type. His job as a paramedic keeps him busy and offers under-the-table opportunities to splash a wee bit of magic around.

Lion's Lair
A newly-minted cave lion shifter + an eagle shifter who’s lived long enough to know better = irresistible allure
Strong and self-assured, Jeremiah is the closest thing his mage kinfolk have to an alpha. He takes his responsibilities seriously, which hasn’t left time for much of anything, and it’s about to get worse
Unbalanced
Sparks ignite.
Flames turn HOT.
Scorching HOT.
But what would you expect from two dragons?
Zachary Marston, dragon shifter, hasn’t done a whole lot of shifting lately. Nope, he spends his time buried in law books as he presides over Superior Court in Denver. He’s convinced himself things are great, but his dragon has other ideas. His bondmate is a tough adversary. After it threatens to abandon him, Zachary gives in and agrees to a meeting with a few other shifters. Maybe he can help out—before returning to his cushy courtroom.
Email Post
Labels: mages magic paranormal Paranormal Romance paranormal romance series shifters supernatural werewolves