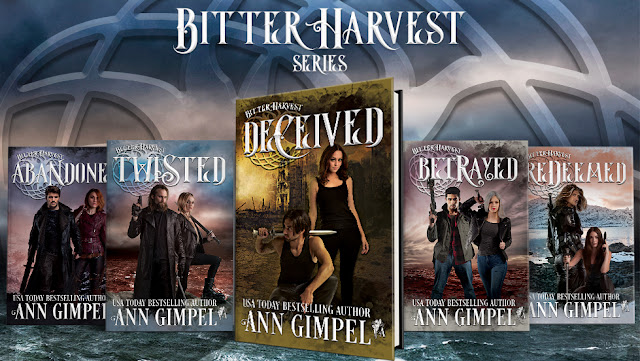 Welcome to my latest series.
Bitter Harvest is teeming with strife, betrayal, and heat.
Magic broke the world, but the worst is yet to come.
Deceived, Twisted, and Abandoned are out. Betrayed is done and will be up for preorder before January 20th. Redeemed will be along over the next few months. Full length, post-apocalyptic urban fantasy with a serious side of steam.
Deceived:
The sea may have been a harsh mistress, but Viktor longs for the challenges of wind and weather, for the sound of waves crashing over his hull. Turned by a Master Vampire, he hates what he’s become, but there’s no escape. Not from Ushuaia that’s turned into a city of bones, or from the Vampire who rules him.

Ketha and eleven other Shifters traveled to Ushuaia to harness the power of an eclipse and were trapped there when the world turned upside down. Ten years later, they’re staying one step ahead of Vampires who blame them for the cataclysm.

With her luck running low, Ketha turns her badly depleted magic on the Vampire assigned to lock her away and gets sucked in by her own spell. Maybe magic can’t save the world, but love might be able to salvage what’s left.

Click here for more information and links for Deceived. Or just keep reading for a sample and a free excerpt ready for download.

Twisted:
A small group of Shifters sails south from Ushuaia, determined to assess what’s left of the world. A Vampire attack, a possessed priest, and a gateway to Hell mean fallout from the spell gone bad that pinned them in Ushuaia for years is far from gone.


Back on a ship again, Juan reconstructs what’s always been a comfort zone. The sea is the only life he’s ever known—if you don’t count the ten years he spent as a Vampire. His new magic, fueled by a bond with a mountain cat, brings its own set of challenges, but they pale in comparison with the white-hot need knifing through him whenever Aura is anywhere close.


A historian by trade, Aura deals in prophecies for her Shifter pack. Attraction for Juan ignited when they fought the Cataclysm, but she figures he left a string of broken hearts during his years as chief navigator on cruise ships. They have to work together. A self-indulgent affair could ruin everything. She does her damnedest to keep distance between them, but the ship’s not big enough to escape yearning for a future together.

Abandoned:
A handful of Shifters. A hardy ship. An upside-down world where evil runs rampant and none of the old rules apply. Taking a stand against the Cataclysm solved a few problems, but others rushed in to fill in the void.

Recco misses his cozy lab and well-organized veterinary clinic, but ten years as a Vampire stripped him of any illusions. Life is done handing him everything he wants. He could rail against fate—which never bought him much—or suck it up and keep going. Defeating the Cataclysm broke Vampirism’s hold on him, though. Even better, it threw Zoe square in his path.

When Zoe left Ireland for a visiting professorship in Wyoming, she assumed she’d be home in a year, but her assumption swung around and bit her in the ass. The Cataclysm, a spell trapping her in Ushuaia for a decade may be gone, but it left a hell of a legacy. One that’s far from done chasing her

Darkness stalks the ship. Evil that will stop at nothing to protect itself.
*********
Here's an excerpt from Deceived. If you enjoy it, here's a link for a free download of the first few chapters. https://www.instafreebie.com/free/aIiDi


....Ketha squeezed her eyes shut and rubbed them with one hand. She needed more information, which meant another vision state, but she was too frazzled to call that much power or to focus her concentration.
Food and sleep would help.
“So would not being a prisoner,” she muttered, feeling sorry for herself before she recognized it as useless indulgence.
Ketha reached for the cloth bag and opened its string closure. Her eyes widened as she pulled out a carrot, two potatoes, and a dead rat. Juan must’ve raided some kind of secret greenhouse for the vegetables. Or maybe he knew where one or more of the human enclaves were—and wasn’t telling his sire. Rats were easy enough to come by, and this one was conveniently drained of blood. Ketha dragged a knife from its sheath beneath her robe and made short work of skinning the rat.
The Vampires hadn’t bothered to search her. Or maybe they had and had laughed at her four-inch blade, not viewing it as any kind of threat.
A pit at the far end of the cell held rocks and charcoal bits. She walked to it and focused a thin beam of magic to heat the rocks. Once they were ready, she placed the meat and potatoes on them. She munched down the carrot while she waited.
The scents of cooking food soothed her. She didn’t see how, but maybe things would turn out better than she expected. Once she’d eaten and rested, she’d look into her glass again, trolling for more clues about the future.
A muted squeak drew her attention to a pair of fat, curious rats, drawn by the smells of her dinner. Magic sizzled, and she stunned them both. An idea blasted her, and she ran with it. Letting her robe pool around her, she unlaced her boots kicking them off. Naked and shivering, she summoned shift magic. It might be an extravagant use of power, but tonight they’d have two meals, by God.
Hers and her wolf’s.
Her black-and-gray timber wolf roared into being and scooped up both rodents, crunching hungrily. Ketha welcomed her animal nature with a vengeance. Its presence made her whole, and she savored the hot tang of blood sliding down her gullet. When those rats were gone, she broke a cardinal Shifter rule and used magic to lure half a dozen more.
Not only did the wolf not censure her, it added its power to hers until a cavalcade of rodents marched through the cell, ripe for the plucking.....