Dark, Dangerous Men and the Badass Women Who Love Them 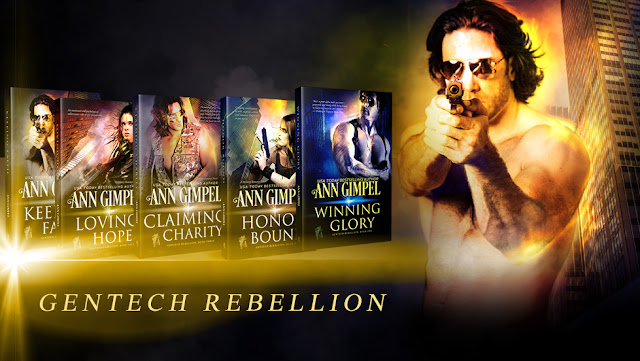 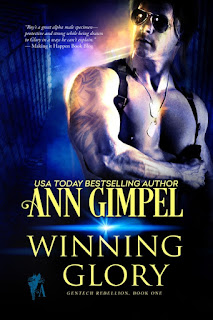 After years as a black ops CIA agent, nothing surprises Roy Kincaid, yet his current assignment is close to a bust. How could his target—renegade genetic freaks—drop off the radar as if they never existed? Burnt out and discouraged, he hunches over a meal in a backwater diner when a half-frozen woman with the look of an abused runaway staggers through the door. On his feet in an instant, Roy kicks himself. His first instinct is to help her, make certain she stays long enough for the bluish cast to leave her lips. His second is to finish his meal and leave. The world is full of broken women. It’s not his job to fix them, but he can’t take his eyes off her.

Glory’s telepathic ability blares a harsh warning. Roy hunts those like her, but damn if he didn’t buy her dinner. Maybe she can fool him, just for tonight. Add a dry motel room to the meal. If she plays it very cool, he’ll never find out she’s on the run from the same group he’s targeted for death.

Enhanced genetics only go so far. A roadblock and her face on a Most Wanted flyer shatter her fragile truce with Roy. If her Handlers find her, they’ll kill her. If Roy finds out what she is, she’ll be worse than dead. Click here for more information and links. 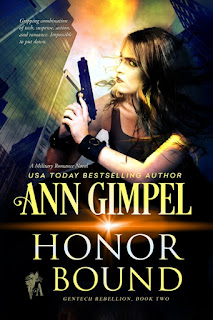 Honor takes a huge chance and flees her compound one wintry night. A genetically altered woman, she has no memories from before her kin staged a rebellion seven years before. Because of her enhanced physiology, she finds a home working for the CIA alongside four other women just like her. There are still plenty of rules, but they’re different, and she’s figuring out how to blend in.

Milton Reins burns through women and marriages. After the third one implodes, he swears off hunting for a replacement. Running the CIA is a more than fulltime job. There’s no time for anything else in his life, which is fine until Honor comes along. Training in the gym throws their bodies together and makes him remember the feel of a woman in his arms. Milton aches for her, but she’s a freak—the CIA term for test tube humans designed by scientists.

Honor wants Milton with every bone in her body, but it’s a terrible idea, especially after she delves into his head and sees his ambivalence toward her kind. Need drives them together, but their differences create roadblocks every step of the way. Fueled by anger and fear, she shuts him out. So what if the sex was great, she’s done. 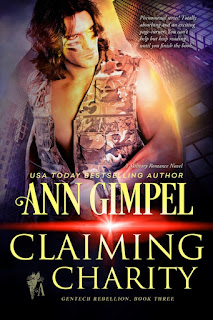 Charity’s luck never ran strong because her original configuration was unstable. Her handlers designed experiments to fix the problem, but only made it worse. Sick to death of living under their thumb, she jumps at a chance to escape. She’s barely settled in as a CIA special operative—a role where she can put her augmented mind and body to use—when her wobbly genetics decompensate.

Tony’s a freak—a genetically altered superhuman waging war against the government. He snaps up an offer of amnesty, walking away from his role as a genetic researcher to work for the CIA. When Charity collapses in a severe seizure, he labors to save her life, but nothing’s working. In a last ditch effort, he joins his mind to hers and discovers he wants her more than he’s ever wanted anything. Only problem is she hates every single male freak for how they treated women in the compounds.

Charity recovers from her medical crisis, but all she can think about is Tony. Furious, determined to never let anyone like him near her, she blocks him from her mind, but he seeps back in anyway. Loving someone like Tony is a huge risk, a gamble that could throw her already volatile genes into a tailspin.

Knowing all that, why the hell is she considering it? 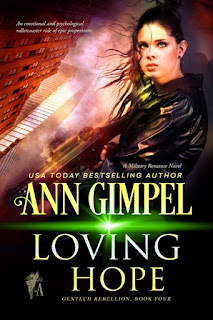 Hope’s had her eye on Charlie for a long time, for all the good it’s done her. He’s not even aware of her existence—other than as a fellow agent working Black Ops for the CIA. Her friends, Glory, Honor, and Charity, found men to love, so Hope knows it’s possible. But the odds aren’t in her favor. Not in a world of normal humans where she’s a genetically modified aberration. Hell, even she refers to her kind as freaks. What man in his right mind would want one of those in his bed?
Charlie swore off women after his last marriage went down in drama-tipped flames fifteen years ago. His first mistress is danger. He fell in love with the adrenaline rush when he signed on as a Navy Seal right out of college, and he never got over the thrill of pitting himself against the impossible.
Hope caught his eye the night she escaped her compound, but years of ignoring anything resembling a feeling made it easy to ignore the attraction—until they’re paired on a mission. Her intelligence and resourcefulness impress the hell out of him, but her half-naked body, exposed after an animal attack, forces him to face feelings he was certain he’d buried for good.

Click here for more information and links.
Keeping Faith, GenTech Rebellion #5
Releasing toward the end of March 2017.
Faith fled her compound one wintry night with four other genetically modified women. Glory, Honor, Charity, and Hope have all found men who adore them. Faith is happy for her sisters, but it’s lonely on her own. A man piqued her interest, but she ran the probabilities, and the odds of him ever being interested in her are thin. Tough and forbidding, Reginald was a field surgeon in the Middle East. He eats and breathes medicine. Besides, he’s married to the CIA. No wives in his past. Faith hacked into the personnel database to check. 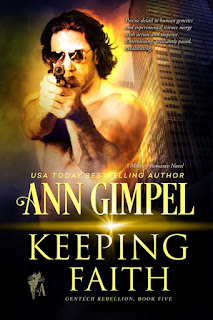 Reginald Thomas agreed to run the CIA’s infirmary after a bullet nailed him in Afghanistan. He’s one of a handful of scientists who produced the original batch of genetically modified humans, and he’s laid low since their rebellion. The catastrophe rankles, but he hasn’t given up finding a fix for their genome problems.
A permanent bachelor for a host of feeble reasons, he’s substituted immersion in medicine and science for a personal life. Easier that way. And a whole lot cleaner. The status quo might be sterile, but at least it’s trouble free. When Faith catches his eye, he fights his attraction to her, but it’s a losing battle. Loving her fulfills him, and he can’t walk away. What will happen if she finds out he created those like her? In a radical departure from his normal forthright manner, he buries that fact deep. If she never finds out, it can’t ever come back to bite him.
More information and buy links will be available soon.
﻿
﻿
﻿
Email Post
Labels: Ann Giimpel genetic engineering GenTech Rebellion military romance romantic suspense science fiction romance