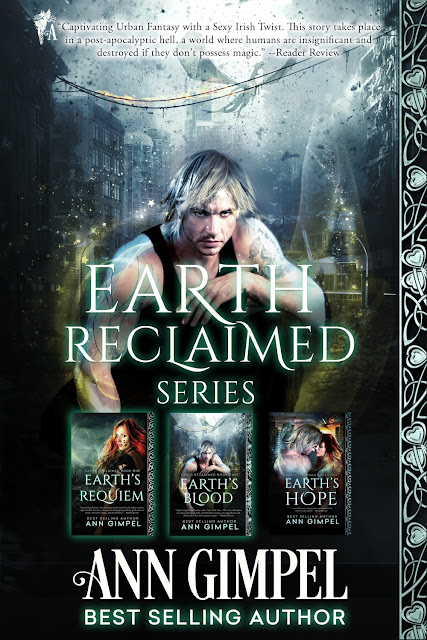 Available for the first time as a boxed set! Over 900 pages of award-nominated Urban Fantasy.

Resilient, kickass, and determined, Aislinn Lenear has walled herself off from anything that might make her feel again. Until a wolf picks her for a bond mate and a Celtic god rises out of legend to claim her for his own. Power so old, deep, and chilling it hurts to think about it will overrun Earth if nothing changes. Targeted, furious, and fighting back, Aislinn gathers allies, putting her life on the line.

Earth’s Requiem:
In a world turned upside down, where virtually nothing familiar is left, Aislinn is conscripted to fight the dark gods responsible for her father’s death. Stripped of every illusion that’s ever comforted her and battling evil on her own terms, she’s turned into a one-woman army.
Fionn MacCumhaill, Celtic god of wisdom, protection, and divination has been laying low since the dark gods stormed Earth. On a clear winter day, Aislinn walks into his life and suddenly all bets are off. Awed by her courage, he stakes his claim to her and to an Earth he's willing to fight for.
Aislinn’s not so easily convinced. Fionn’s one gorgeous man, but she has a world to save. Emotional entanglements will only get in her way. Letting a wolf into her life was hard. Letting love in may well prove impossible.

Earth’s Blood:
Clinging to their courage in a crumbling world, Aislinn and Fionn vow to save Earth, no matter what it takes.
In a post-apocalyptic world where most people have been slaughtered, the Celtic gods and a few humans with magic are all that stand between survival and Earth falling into chaos. The combination of dark sorcery leveraged by the enemy is daunting. Destruction is all but certain if the small enclaves of humans who are left can’t get past their distrust of the Celts.
Blending dystopian urban fantasy with romance, Earth’s Blood turns into a proving ground for Fionn and Aislinn’s love. Headstrong and independent, the pair run up against each other’s demands time and time again. In the end, they learn to savor every moment in a bittersweet world where each day may well be their last.

Earth’s Hope:
Aislinn Lenear has traveled a long road since the dark gods invaded Earth better than three years ago. After seeing her father slaughtered in front of her, and her mother sink into madness, she built strong walls around her heart. First her bond wolf, and then Fionn MacCumhaill, changed all that, but she and Fionn are far from home free.
Four of the six dark gods are still sowing destruction, and they’ve joined forces with Lemurians, a desperate lot, running just ahead of the tide of their own mortality. In a bold move, the Lemurians try to coopt a group of young dragons, and very nearly succeed.
In a fast-paced, tension-riddled closure, Earth's Hope sweeps from Ireland to the Greek Islands to the Pacific Northwest to borderworlds where the dark gods live. Fionn and Aislinn’s relationship is strained to the breaking point as they struggle to work together without tearing one another to bits. Fionn is used to being obeyed without question, but Aislinn won’t dance to his tune. If they can find their way, there may be hope for a ravaged Earth.﻿

Reviewer Praise for the Earth Reclaimed Series:
Earth’s Requiem -- Amazon Top 100 Bestseller for over three months
Have you ever picked up a book by a new to you author and been transported to another world? That is what happens when you start reading Earth's Requiem by Ann Gimpel. You are transported into her world of our earth, a post apocalyptic earth, but ours none the less. Holli Greer
I was hooked from the first chapter. This story is interwoven with mythology, history, magic, love, friendship and survival. Each layer is interlocked so seamlessly and you can't tell where one starts or ends. The characters are colorful, the friendships deep and the story grabs hold of you and does not let you go. Niki Driscoll
This story was amazing. Gimpel really knows her world building. We are thrust into this new world and you feel like you are there. It was very easy to get lost in this book. Offbeat Vagabond
The world of magic and mythology comes to life, the prophecies so fascinating it’s easy to lose onself in Ann’s stories and forget everything in the real world. Definitely a hit right out of the park. InD’Tale Magazine
Earth’s Blood -- Amazon Top 100 Bestseller
I fell in love with these characters and their world in the first book Earth's Requiem and more so in Earth's Blood!!! The characters and world is so detailed that you feel as though you are there and for me that means it is an amazing book! Cupcakes and Books
Top notch read!! Do yourself a favor a pick this book up! Fury8 Bibliophile
Book 2 is just as fantastic as the first! Please note to read Earth's Requiem (book 1) first as it would answer many things and keep you better connected to the wonderful world that has been created. Just as the first book this one grabs you from the start and pulls you into a wonderfully created world with a tension filled plot, beautiful descriptions and easy to love characters. Book Bliss Blog

With Gimpel, you won't get the "same ole, same ole" tired paranormal romance, urban fantasy, and fantasy tales. With this author's penchant for gravely injuring characters, and sometimes killing them off, you never know what to expect other than a good story. Ann Gimpel is on my "must read" author list. Wild About Bones

Have you ever sat down and had a marvelous meal? Been so full you couldn't eat another bite, yet, it was just so good you still wanted more? That is what you get when you finish the final installment of the Earth Reclaimed Trilogy by Ann Gimpel. Holli Greer

The twists and turns that this portion if the story takes was absolutely riveting and I couldn't put it down. I absolutely loved how Ann Gimpel tied up the many loose threads into a tidy ending. Stephanie

God but I love this series... bittersweet that this book ties things up so nicely.
Aislinn is every bit her feisty self, Fionn still the perfect mate for her. The dragon lore is weaved flawlessly into the storyline along with the Celtic gods' mythology. Well done Ann! Missie Kurr