A Warm Welcome to Christy Gissendaner and Her Brand New Release, Christmas Spirits 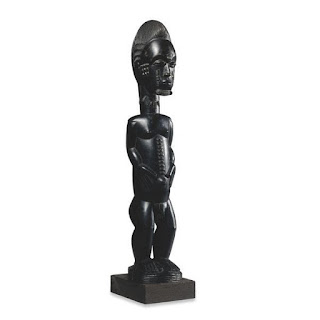 The Baoule people of Africa’s Ivory Coast believe a parallel universe, called the Blolo, exists where the spirits of newborns waiting to be born and the deceased co-exist with the real world. Every spirit has a mate in the Blolo, who can be enlisted to save their mate’s problems while in our world. Interesting? I certainly thought so. Enough to write a Christmas novella centered on the Baoule culture.


Romantic problems, infertility, and general unhappiness in the real world can be cured by commissioning figurines of spirit mates. Blolo bian (males) and Blolo bla (females) are generally carved from wood and are created to the specifications found most desirable in a spirit mate. Food, money, and attention can be given to the spirit mate to keep them appeased, thus allowing a person to find happiness in the real world.


Active relationships are maintained between spirit mates, particularly in a dream state. It is believed that nocturnal visits from a spirit mate will initiate healthy interaction between a person and his or her physical mate.


Much detail is given to these figurines - plump bottoms, elegant necks, thick legs. All the attributes desirable in a proper Baoule mate. Social status and individuality is acquired by use of adornment, costume, and hairstyle. Even skin tone is considered when commissioning a spirit mate statue.


This very primitive…yet romantic...practice provided the inspiration for Christmas Spirits, a holiday themed novella set in modern-day Georgia. A chance reading in an old encyclopedia and Tedros, the “spirit” of Christmas Spirits, was born! The story is meant to portray the reality of spirit lovers, and I took a very atypical approach to most romance novels.