How Can You Move Past a Lifetime of Hate? 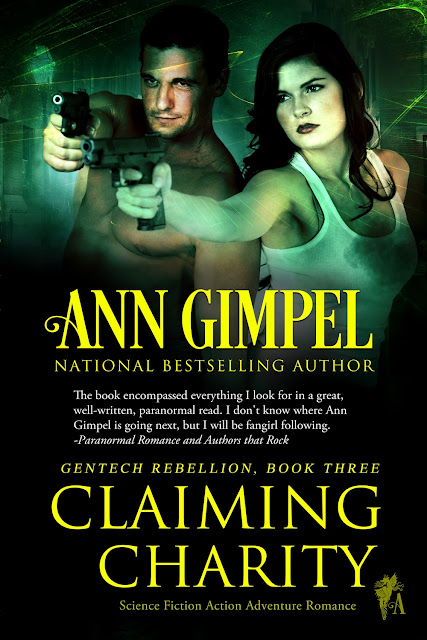 What does it take to move past a lifetime of hating?


Charity’s luck never ran strong because her original configuration was unstable. Her handlers designed experiments to fix the problem, but only made it worse. Sick to death of living under their thumb, she jumps at a chance to escape her compound. She’s no sooner settled in as a CIA special operative—a role where she can put her augmented mind and body to use—when her wobbly genetics escalate.


Tony’s a freak—a genetically altered human waging war against the government. He snaps up an offer of amnesty, walking away from his role as a genetic researcher to work for the CIA. When Charity collapses in a severe seizure, he labors to save her life, but nothing’s working. In a last ditch effort, he joins his mind to hers and discovers he wants her more than he’s ever wanted anything. Only problem is she hates every single male freak for how they treated women in the compounds.


Charity recovers from her medical crisis, but all she can think about is Tony. Furious, determined to never let anyone like him near her, she blocks him from her mind, but he seeps back in anyway. Loving someone like Tony is a huge risk, a gamble that could throw her already precarious genes into a tailspin.


Knowing all that, why the hell is she considering it?


Sometime between the interminable wars in the Middle East and 9/11, the United States moved forward breeding a race of super humans. Clandestine labs formed, armed with eager scientists who’d always yearned to manipulate human DNA. At first the clones looked promising, growing to fighting size in as little as a dozen years, but V1 had design flaws.


Seven years ago, a rogue group turned on their creators, blew up the lab, and hit all the other breeding farms, freeing whomever they could find. In the intervening time, they’ve retreated to hidden compounds and created a society run by men. Women are kept on a tight leash because the men fear if they discover their innate power, they’d launch their own rebellion.


…Tony dialed his night vision up another notch and paced Frank as they ran hard around Langley’s perimeter. After being cooped up for hours in a plane, both men needed to burn off some steam. As Tony ran, scenes from his computer-like brain flashed before him.


After his petri dish birth on one of the breeding farms set up by the U.S. government, he’d been groomed from adolescence to work as a genetic researcher. None of them attended school; their knowledge was downloaded directly from huge mainframes operated by government scientists. He lived a comfortable life at his breeding farm near Portland, Oregon, but it blew up in his face seven years ago. He was twenty-two then and knee-deep in research to perfect those like him. Each successive strain was a bit better than the last, but problems still cropped up.


He’d been close to a major breakthrough—at least he thought he was, but it could’ve been a dead end like so much of his research—when a cadre of renegade freaks, genetically engineered humans just like him, staged a rebellion. They hadn’t cared for the decision to scrap the earlier prototypes, so they blew up every breeding farm they could find. After that, they created hidden compounds, like the one in Keyser, West Virginia where Tony ended up.


He hadn’t bought into the violence, but there wasn’t a hell of a lot of choice once it began. Normal humans shot them on sight after the rebellion, so he went along with the program and moved his genetic research to his assigned compound. He didn’t have nearly the access to materials he’d had prior to the rebellion, but at least he was still alive.


The other man snorted. “Always dangerous. About what? Did you come up with something we missed on those hard drives Milton swiped from our headquarters?”


“Nah. Wish it were that straightforward.”


Frank slugged him in the arm. “Watch that esoteric stuff. Our programming’s not designed for it.”


“Maybe not, but do you ever wonder what will become of us?”


“So? You and I discussed this before we showed ourselves and requested amnesty. We could’ve remained hidden. They would have found Charity without our help, and then they’d have left. We didn’t take that route. Are you having second thoughts?”


“Not really. We didn’t fit in with the other Nameless Ones—except it was a ridiculous moniker, since we had names, we just didn’t tell them to the women.” Tony slowed when they came to a perimeter fence and turned to face the other man. Because of the physical strength built into his genetics, he wasn’t even slightly winded.


Frank stopped and tossed his hood back. Shaggy black hair fell to his shoulders, and he examined Tony through his amber, animal-like eyes with vertical slit pupils. All the men looked very much the same due to shared genetics. Tall, rangy, muscled. Both of them wore regulation issue CIA field gear they hadn't changed out of yet.


“What aren’t you saying?” Frank asked.


“Not sure. Except I’m feeling like a man without a country. We didn’t fit in there, but we don’t fit in here, either. They don’t trust us. I saw it in Milton’s eyes that night you and I saved Charity’s life.”


Frank grimaced. “Shit, bro. We’re machines. We’re not supposed to have feelings. Who cares if they trust us, so long as they continue to offer us a place to work and live? When did you fall off the wagon?”


Tony weighed the advisability of confiding in Frank, but if not him, then whom?


“Talk, or I’m going back to my apartment. I’m fine when we’re moving, but I’m getting cold. Can’t be much more than fifteen degrees out here. In fact,” Frank sent a short blurt of power outward, “it’s eighteen point three Fahrenheit, but there’s a five knot wind, which brings the ambient temperature to—”


“Never mind that. I know it’s cold without a weather report. I have a problem that runs deeper than the humans not trusting us. They made a commitment to us, same as we did to them. The odds of them welching on the deal—so long as we don’t fuck them over—is under twelve percent.”


Frank furled his brows. “Okay. So you have a problem. Is it something we could hash out inside where it’s warm?”


“Fine.” Frank gestured with a gloved hand. “Whatever it is, get it out, so we can chase down something to eat and find our beds.”


Tony unclenched his jaw. It was either spit it out or shut up. Running probabilities about Frank’s reaction wouldn’t alter his choices. He squared his shoulders and began to talk. “I spent a long time—hours—linked to Charity when she was so compromised. I was the one who sent my energy into her.”


“I developed a fondness for her during that time.” Very unmachine-like feelings tightened Tony’s gut.


Frank’s eyes widened. “Oh ho! You want to fuck her. I’m not seeing where that’s a problem. The women were off limits to us at the compounds, but the CIA doesn’t have those kind of rules.”


The unmachine-like feelings intensified, and Tony felt his face grow warm. “Yeah, I want her that way, but it’s more than that. I like her. She’s a bitch, sure, but she’s fresh and funny and spunky. We drummed the spirit out of so many of the women, but not her.”


“Have you talked with her about any of this?”


“Why not? Seems to me that’d be the logical place to start.”


A snort blew past Tony’s lips. “Yeah, huh? Problem is I got a pretty good look inside her head. She hates us.”


Frank drew back. “Why? She never even met us before she and her group attacked our compound.”


Tony shook his head again. “It runs deeper than that. She hates all of us men—for how we treated her and the other women. Even if that weren’t there, it must’ve been appalling for her when she discovered the V4s slaughtered the females in our compound. Her team planned to rescue them. The V4s figured it out and beat them to the punch.”


“Yeah, but none of that was personal—” Frank began.


“Try telling her that. I’m sure it felt goddamned personal. Christ! The women’s bodies weren’t even cold when Charity stumbled onto them.”


“I’m not sure Charity found them, but the women who did certainly told her about it.” Frank jerked his chin in the general direction of their apartment building. “Let’s get moving.” When Tony fell into step with him, he went on. “Seems to me you’ve really only got two choices. One. You suck it up and keep quiet. We weren’t exactly designed to have mates. All our babies were created in test tubes—even after the breeding farms.”


“That was because we were afraid the women would pick our brains during sex, discover how powerful they were, and demand equality.”


“It doesn’t matter why,” Frank replied. “Even though I was a minority, I never believed it would’ve been the end of the world if the women discovered their innate power, but they didn’t. Regardless, over time, we got away from intercourse as a primary source of procreation.”


“We’re getting off course. What’s my second option?”


“Sit down and talk to her. Tell her how you feel.”


Tony rolled the probabilities of how that would go through his brain. “Less than an eighteen percent chance she’d be open to it,” he muttered.


Frank didn’t respond, and they ran the rest of the way to their building in silence. Once they were inside, Tony said, “Thanks.”


“For what? I didn’t help much. See you tomorrow at zero seven hundred.” Frank turned down the hallway that led to his apartment.


Tony climbed a flight of stairs to his quarters and let himself in. If getting something going with Charity was such a crapshoot, why couldn’t he let go of the idea?


When the answer came, he didn’t like it much. He’d broken protocol to save her, blending his energy with hers in an intimate pattern that wasn’t in any of the manuals. Apparently she’d gotten under his skin during the process, and now he was stuck. When he wasn’t busy, she was all he thought about.


He stripped out of his heavy field coat and tossed it over a chair. The rest of his clothes ended up in a heap on the floor. Everything could stand a tour through the washing machine, but not tonight. He headed for the bathroom and a shower with his cock standing out like a ship’s prow. He was hard almost all the time now, despite jacking off two or three times a day. Hard because he wanted her.


He pulled the shower curtain aside. Once he got the water going, he stepped over the high rim of the tub. Even though he tried not to, his hands found their way to his engorged flesh, and somewhere between the soap and hot water, visions of what he thought Charity’s perfect, naked body would look like danced behind his eyes…