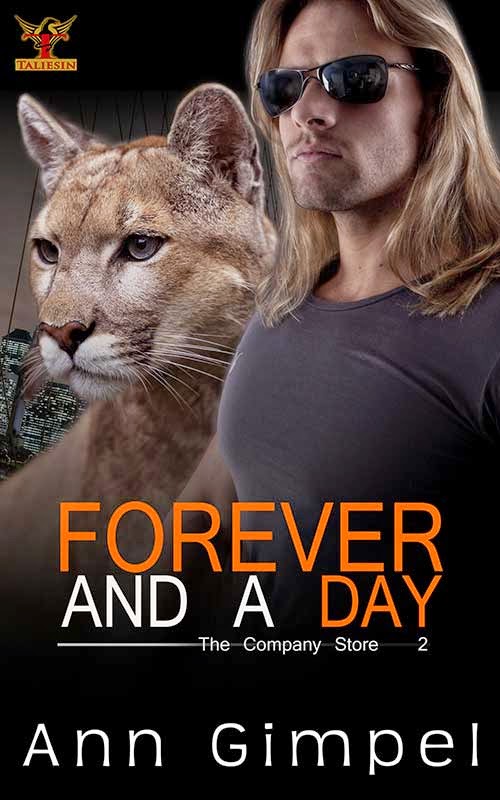 Forever and a Day
The Company Store, Book 2
by Ann Gimpel

Espionage operations and runaway love travel halfway around the globe as Tamara and Lars stay one step ahead of death. Tension heats to boiling, but it’s not half as hot as the attraction licking at their heels.

Blurb:
Tamara MacBride has a much bigger problem than hiding her shifter side from the world. By the skin of her teeth, and with a smattering of Irish luck, she manages to kill her sister’s murderer. Escaping from the scene of the crime is proving much harder than she anticipated. Just when she thinks she might be safe, her cab driver shrieks and slumps over the wheel. She cowers in the back seat, too scared to run, expecting the next bullet will be for her.
An unknown assailant terminates Lars Kinsvogel’s target. Pleased by the outcome, after all dead is dead, Lars exchanges the glitz of Monto Carlo for a nearby airport intent on collecting the private plane he left there. He’s no sooner arrived when a cab jumps the curb. His instincts blare a warning, but Lars ignores them and trots over to investigate. There’s not much he can do for the cabbie, but his passenger is still very much alive—and absolutely stunning. It takes some tall talking, but she agrees to come with him.


Espionage operations and runaway love travel halfway around the globe as Tamara learns to accept her shifter side, and Lars embraces what’s been missing from his long life. Initially reticent to trust one another, it takes a series of crises and a near-fatal accident for them to take a chance on love—and each other.

Excerpt:
Lars Kinsvogel sucked in an annoyed breath. Anxiety and greed thickened the air in Monte Carlo’s Place de Casino, and he stifled a choking sound. Damn his hypersensitive shifter senses. If it weren’t for them, the desperation hovering around him wouldn’t be quite so palpable. Casinos were always like this, though, a haven for the rash and reckless. What had likely begun as a harmless pastime turned into hardcore addiction for an unfortunate few, forcing them to return again and again despite diminishing returns.

Hope springs eternal. All the poor sods need is one more spin of the wheel, another hand of cards… Lars looked up, right into the croupier’s beady gaze.

“Would monsieur like to place a bet?” The croupier grinned with all the warmth of a hammerhead shark, displaying a mouthful of bad teeth. What was it with the French and their aversion to dentistry? Lars shook his head and made shooing motions with one hand. He’d have to either join the baccarat game soon, or move on, but he could get away with loitering for a few more minutes without drawing undue attention to himself.

His target, a powerfully built man with Asian features revealing his half-Chinese ancestry, had an arm slung around a striking brunette. Maybe she was one of the hookers who worked the casino circuit, maybe she was a steady thing for the man. Lars considered it and decided she could be both. Around five feet eight, she had a lush, curvy body, hair cut into a stylish bob that fell a few inches past her shoulders, and memorable eyes the color of a restless ocean. A short, black sheath hugged her like a second skin. Open nearly to her waist, it displayed half her full breasts. Even though Lars’ appraisal was surreptitious, he forced his gaze elsewhere. The woman was sex incarnate, and he didn’t need anything diverting him from his objective.

Jaret Chen pressed chips into his companion’s hand and urged her to pick a number. He gave one of her breasts a familiar squeeze, which earned him a smile, perfectly rouged lips stretching over impossibly straight teeth—and a slight shake of her head. Color stained her tanned skin. Lars realized he was looking at the woman again, wondering how her breasts would feel beneath his fingers. She seemed uncomfortable with Jaret’s frank exploration of her body, so she probably wasn’t a pro. For some unexplained reason, Lars felt relieved. The woman was too elegant to earn her living lying on her back.

He snorted to himself and studied the flashing display above the baccarat table. Maybe the woman wasn’t French. That might explain her perfect teeth—and her discomfort with having her body mauled in public. At least she held Jaret’s attention. So far the drug dealer hadn’t spared him so much as a sidelong glance. Lars had never met the man, but knew a great deal about him from an extensive dossier provided by The Company, Lars’ international security employer. Deeply involved in the heroin trade from the Middle East, across the Mediterranean, and into Europe, Jaret was one of the principals in a large operation—and Lars’ current project.

He sized the man up. Maybe six feet, he had a barrel chest. Strongly muscled arms strained against the fabric of his cream-colored silk dress shirt. His art deco tie had been loosened. Dark eyes, pronounced cheekbones, and straight dark hair cut short blended with his business attire. For all intents and purposes, he was indistinguishable from the phalanx of wealthy—and wannabe wealthy—men circulating through the casino. Lars glanced at his own cream-colored silk shirt and black linen pants. With the exception that his tie was still firmly knotted, he and Jaret were dressed as twins.

Guess neither of us wanted to stick out in anyone’s memory.

Lars glanced at his Rolex. Close to midnight and time to move on. He’d seen enough. Now it was a matter of figuring out where and when to strike. These things always went more smoothly when they were nearly invisible. He melted into the crowd and made his way outside. The casino fronted the French Riviera; Lars stood looking out at the Mediterranean for long moments. The water was quiet tonight, waves barely slapping the white sand beach. His cell phone, set on silent, vibrated against his hip, and he tugged it from a pocket to look at the display.

Private. Damn! Could be anyone.

Lars punched the answer icon, held the phone to his ear, and waited. No need to say anything until he knew who was on the other end.

“Are you somewhere you can talk?” Lars inhaled sharply as Garen LeRochefort’s voice came through the phone’s speaker. Another shifter, Garen had founded The Company hundreds of years ago. The mechanics of the spy game had changed drastically between the late seventeen hundreds and modern times, but the basics—kill or be killed—hadn’t altered much. Everyone who worked for The Company was some type of shifter. Lars’ animal form was a mountain lion, Garen’s a wolf.

Lars loped farther down the beach until he cleared several couples engaged in deep, hungry kisses. “What has happened?” Something must have, or Garen wouldn’t have risked contact.

“You need to leave.”

“Doesn’t matter,” Garen cut in. “I’ll explain when you’re back in the office on a fully scrambled line.”

Lars thought about his twin engine Piper Seneca waiting at the Nice airport, fifteen miles from Monte Carlo. It gave him freedom to come and go, and was much cheaper to operate than the business class jets he also owned. “Maybe I could still—”

“No!” The one word thundered so loud, Lars moved the phone away from his ear. “Don’t even go back to your room.” Garen hesitated. “Old friend. Trust me on this.” The line went dead.

Lars stared at the iPhone’s display and dropped the cellular device back into his pocket. He’d been compromised. He wasn’t certain quite how, and a part of him was curious as hell. He kept walking, swinging in a wide circle to head back toward the Hotel de Paris. Garen had said not to return to his room, but if he were careful, maybe he could learn something critical that would help their side.

“Ja, forewarned is forearmed,” he muttered. Keycard in hand, he let himself into a side door of the rambling old structure, got his bearings, and started cautiously up a stairwell. His suite was on the second floor, at the very end of the wing facing the Mediterranean. He’d always loved the old hotel with its thick, patterned carpets and antique lighting and furnishings. Staying next to the walls, he used a bit of shifter magic to cast a don’t look here spell. It wouldn’t keep someone determined from seeing him, but it didn’t require much magic, either.

He entered the second floor a few doors from his own and scanned the empty hallway, his senses on high alert. Midnight was early in Monte Carlo, a city where people frequently stayed up through dawn and slept the day away, so he fully expected to see other guests, but the hall was mercifully empty. He padded silently toward his door and examined it, wishing he’d set a trap. He inhaled, trying to sort scents, but there were too many to make sense of. He could leave, just walk away like Garen had almost ordered him to, but Lars had never been a coward, and he was more intrigued than frightened. He’d spent years worming his way out of dicey situations. This was just one more, and he was damned if he’d walk away from his things. Not unless he had to.

He took a deep breath, tugged his guaranteed-not-to-set-off-metal-detectors .32 caliber revolver from its ankle holster, and shoved the key card into the slot in the door. A tiny electric motor hummed and the deadbolt snicked out of the way. He turned the latch, kicked the door open, and turned from side to side scanning the sitting room of his suite, gun at the ready. Lars waited in the doorway, barely breathing, and then he heard a muted click, followed by an unmistakable whirr, and knew.

He cursed in German, not knowing if he was more annoyed with the turn of events or with himself for not taking Garen’s advice and getting the hell out of there.