Historical Romance--With a Shifter or Two to Keep Things Interesting 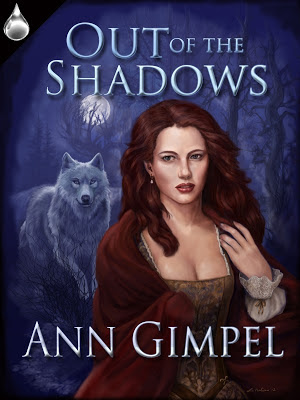 Blurb:
Come join me in a tale of unforgettable love which spans two continents and reveals the shadows where our nightmares live. From the old country to the new world, one woman learns you cannot change who and what you are in a quest for everlasting love.


Relegated to a shadowy existence of half-truths, Gwendolyn lives in fear her wolf side will be discovered. She leaves the Old Country with Hunters nipping at her heels, but things in the aren’t any better. Eighteenth-century society is just not kindly disposed to either shifters or witches. Mikhail, the love of her life—except the relationship always felt pretty one-sided—has been missing for a hundred years. When he shows up after escaping imprisonment from an Abbey in , Gwendolyn is ecstatic to see him. But she’s afraid nothing’s really changed. Victimized by superstition and running for her life, she’s sure she’ll never be able to emerge from the shadows.


Excerpt:
The full moon rode low in the sky, clinging to the horizon far longer than it should have. A blood-red cast made it eerie and threatening somehow. Gwendolyn threw back her head and howled along with all the other wolves in her shifter pack, but something about the moon was so ominous that hackles rose along her back.


High, wailing shrieks, shrill as banshee cries, split the night. Her nostrils flared, scenting the air. Humans. Humans had found them. Not humans, Hunters. Humans wouldn’t interfere with a wolf pack as large as hers. They’d be torn to bits reloading their muskets, and they knew it. Before she was even done thinking, Gwendolyn put her head down and ran, keeping to the shadows of a thick Austrian forest.


Shots rang out, lending her speed she hadn’t realized she was capable of. Howls, growls, and snarls faded as she put distance between herself and the ambush. Her breath left white plumes in the cold night air. She kept running. It was what they were supposed to do. She’Lara, the One Wolf and their leader, had said it often enough. “Do not let yourselves be captured. Hunters will bind you with iron and interrogate you. When they are done, they will kill you. Better to die free.”


She didn’t know how long she ran. Her wolf side wasn’t any good at judging things like that. She stumbled and knew how tired she was. Her flanks heaved as she willed herself to keep going. The scent and sound of rushing water filled her senses. She realized it had been there for a while, but she’d been so focused on possible pursuers she hadn’t been paying attention. Without warning, the earth before her fell away. She stuck out both forelegs to break her fall, skidding on her haunches. It didn’t help. She tumbled down a steep embankment right into the muddy .


Her thick wolf’s coat shielded her from the water’s chill as she let the river carry her downstream. If anyone was looking for escapees from her pack, a few more miles between her and the Hunters wouldn’t hurt.


Gwendolyn clawed at the bank and pulled herself out of the water. The sky was lightening in the east. Shifting in broad daylight was risky. It upped the odds of discovery. Given the surprise attack, staying in wolf form didn’t feel any too safe, either. She shook herself from head to tail tip and then did it again. Clothes would be a problem. She’d left hers near where her shifter pack had gathered—miles from her present location.


She looked at the sky again and made her decision. She did not want to ride out the coming daylight hours as a wolf. Smoke stung her sensitive nostrils. That meant people lived nearby. Melting into the deeper darkness between two gnarled oaks, she gave her body the command to shift. The first thing she noticed was how cold she was. And a sharp thorn under one of her feet. Human bodies were fragile. Because her wolf self had been wet, her human form was too, which meant her long, copper-colored hair clung to her head and shivering body.


Good. Maybe I can tell whoever I find that I fell into the river and nearly drowned.


Yes, but that won’t explain why I’m naked.


Sitting still would be a death sentence. She’d freeze. It was late autumn. Even if the sun did come out around mid-morning, it wouldn’t carry much warmth. Gwendolyn took off at a trot, cursing as rocks and brambles cut into her feet. Nostrils twitching, she scented the air for the smoke she’d smelled as a wolf, but couldn’t find it. She shut her eyes. What direction had it come from? Where there was smoke, there were bound to be people.


“Lady!” A man dressed in tanned deer hide breeches and jacket stepped noiselessly out of a thicket. His dark eyes were wide and shocked. Blond hair hung down his shoulders and an unkempt blond beard obscured the bottom half of his face. “What has happened to you?”


She shielded her body as best she could with her hands. “I fell in the river a long ways upstream. I-I must have hit my head and passed out. When I finally pulled myself from the , it was just back there.” She jerked her head over one shoulder, not wanting to move her hands.


“Where are your clothes?”


She felt color rise from chest to face. “If you must know, my husband took them. He was angry because I did not make supper last night.”


The man’s blond brows drew together. “And did he perchance help you into the river?”


Gwen hung her head and nodded. This was going even better than she’d hoped.


“Here.” He tugged his leather top over his head. “Put this on. It should cover your, ah, woman’s parts.”


“Thank you.” She pulled it on. It smelled of sweat and poor tanning, but at least it was warm.


“I have a place not far from here. My wife will find clothes for you.”


Gwendolyn dug in the dirt next to her front door and came up with a key. She shoved it in the lock and let herself inside. Her feet were cut and bruised, but the rest of her seemed none the worse for wear. It had taken her the better part of two days to walk home. She would have made better time if she’d shifted, but didn’t know if she could risk it.


Herbert, the man who’d rescued her, and his wife, Isolde, had been more than kind. She’d stayed with them for a few days, working off the debt she would incur once she left with an item or two from Isolde’s meager wardrobe. Like many country dwellers, Isolde had only a single pair of shoes. She’d offered them, but Gwendolyn had refused. It was bad enough she’d taken one of the woman’s two dresses.


She lit a fire in the stove and then went outside to pump water from the well. She needed to bathe; she could smell herself. As she worked, she realized how lucky she’d been. She hadn’t been raped or set upon by highwaymen. And she was still alive. She wondered how many of her shifter pack had survived.


Nostalgia washed over her. She thought back to when she’d been truly young. Shifters were free to be themselves then. No one persecuted them. They could take their animal form without fear. She’d been born in 1263. It was now the year of our Lord, 1621. “Not my Lord,” she muttered, annoyed with herself for using the phrase even in her thoughts. Gwendolyn wasn’t young anymore, but she expected to live another several hundred years. Shifters had long lives—unless they spent too much time in their animal form.