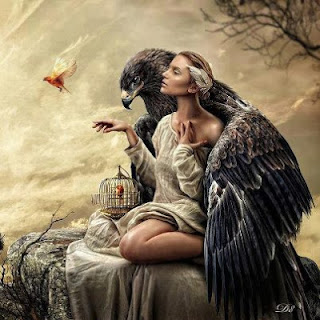 I didn’t start out writing romance. Nope. I started out writing science fiction and fantasy. Hence the whimsical photo to the left. But you know what? After a while I noticed no matter where my story was set: modern world, high fantasy world, or a twisted science fiction dystopia, romantic elements always crept in. It was a natural progression to have the romance be the story, so I’ve written a bunch of pure romances now, too. All of them have paranormal elements, but they have happy ever after endings, too.  I still write quite a bit outside the romance genre, but I think my foray into romance has added depth to the rest of my writing.


Who would have guessed how satisfying it would be to write “happily ever after” or even “happy for now” endings? I think they’re even more fun to write than they are to read. For one thing, the characters are content. Any writer will tell you satisfied characters are way more malleable than unhappy ones. Characters in romance books get what they want: the love of their life. No one is worried how they’ll get along with one another six months or a year down the road.


That’s probably a good segue to my other—and much longer—career as a psychologist. I saw lots of couples in my office over the years. Did I ever save any marriages? Not exactly. I did, occasionally, help a couple reconnect with one another. But mostly, couples who come for marriage counseling show up when there’s been so much bad water under the bridge, it would take more than a dash of suspension of disbelief to resurrect the love that drew them together in the first place.


I think that’s one of the appeals of romance in fiction. It lets us step outside the problems and issues in our own relationships and follow a fictional hero (or heroine) through theirs. The difference is no matter how many bad things happen to our fictional couple, their love for one another conquers all. And they ride off into the sunset at the end, or fall into one another’s arms. The men are all gorgeous alphas. The women strong and sexy. They’re who we secretly see ourselves as when we strip away the obnoxious reality of husbands who leave their clothes scattered all over the floor, scratch their privates, and fart in front of the television. Or wives who text endlessly with their girlfriends.


I was part of an author online chat the other day. Some of the other (female) writers characterized their husbands as “knuckle draggers.” Ahem, don’t see too many of those in romance novels. (In case any of you are curious, I’ve always seen my husband as a renaissance man. Maybe that’s why we’ve been married so long.)


While we’re talking about the nexus where reality meets fiction, let’s not forget the kids who thumb their noses at us when we have the temerity to suggest they clean up their rooms. It’s not accidental that children are few and far between in romance novels. If they do show up, they’re usually infants. Too young to be anything other than cute.


Reading is an escape. Really good books draw us into a world that transcends our waking reality. Sometimes they even give us ideas for how to make that reality work better for us.


What was the last story you just couldn’t put down? Did you immediately hunt for something else by that author? Who are your favorite romance heroes or heroines? I certainly have a few. Tell you what. You show me yours and I’ll share mine.
Email Post
Labels: fantasy Marriage Paranormal Romance Psychology romance Writing