﻿﻿I'm back from Scotland and England. I'm sorry I didn't get to spend a bit more time in Scotland. Really liked it. It seems more wild and untamed than its sister country to the south. And it has mountains. Lots of them: the famed Scottish Highlands. The first thing we did was climb Ben Nevis, highest point in the United Kingdom. It has a trail, but it still has 4404 feet of gain. That's a lot. And it takes time. About 4 hours to reach the top. 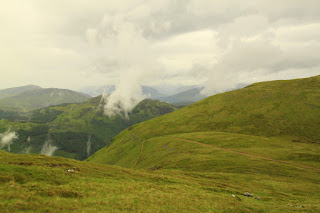 The visibility near the summit was shrouded in mist. Way too much to even consider getting my camera out. My hands were cold, even in gloves, so I wasn't keen to snap any photos that would have come out looking like gray blobs anyway. Many "locals" told me they were, "So sorry the weather's horrid." I was assured the views from the top can be stellar. After roughly nine hours portal-to-portal, I wandered into the Ben Nevis Inn, a humble establishment at the bottom of the trail. To say I was wet would be an understatement. I had full rain gear on,  but nothing can stand up to that many hours of rain, hail, thunder and lightning. The photos at the left were taken during the only segment of the day (about 30 minutes) when it wasn't raining.

I sat down at a table, planning to order an ale. And I started peeling off my wet clothing. Well, my pack cover had about an inch of water in the bottom that I wasn't aware of. It cascaded onto the floor when I shucked my pack. The innkeeper, a surly fellow, yelled at me for getting his floor wet. Sigh . . .I'm sure it's not the first time some climber has gotten water on his precious floor. After all, Scotland is scarcely a dry climate. I offered to mop it up, but he ordered me back out into the rain. I was rather proud of myself. I didn't yell back at him or tell him all the things that were running through my head. I will get even, though. I'm sure there's a place on the Internet (besides my blog) where I can share my tale of woe.

Irony of ironies, after a full day of everything nature could have thrown at me, I was back at my lodging having a fashionably late meal only because I didn't get back until 8 PM, and the sun came out. It was dazzling, shining off the surface of Loch Linnie. It was almost as if it was saying, "See, I was up there all the time. Just wanted to see how tough you Americans were."

Fort William (launching spot for Ben Nevis) was a charming town. There's an old fort that was originally built to "keep the clans in line". And lovely old architecture. Aside from the Ben Nevis Inn proprietor, everyone was wonderfully polite and helpful.

Think I'll say a word about the trains and leave the rest of my travelogue for another post. The trains in the UK and on the Continent are quietly efficient. Because the distances are reasonable, there's excellent coverage. You have to be quick, though. They pull in and leave all within about five minutes, which isn't much when you're trying to muscle a suitcase up the steps and into the coach. We rode the train to Ft. William, but took the bus  back to Glasgow because all the rain the day we'd climbed Ben Nevis had washed out the train tracks! So, when I said it rained hard, I wasn't exaggerating.

So many of the stories I love have a Celtic flavor. It was wonderful to spend time in the center of all that lore. With the fog and mist, I can see how mystical experiences might creep up on you. Think I came home with lots of new story material!

How about all of you. Where would you like to travel and why? What would you want to do/see once you're there?
Email Post
Labels: Ben Nevis flooding mountain climbing Scotland storms Traveling